In mid-2015 we formed a team bringing together people from the theatre industry as well as the tech industry to set a goal to build the ultimate discovery tool for Theatre-goers starting from London. (You can imagine it a bit like IMDb + Trip adviser but for theatre). That’s when Stagedoor was born.
We initially set aside some personal funds to build the first prototype and
prove some decent early traction before reaching out to investors. This was good because it allowed us to negotiate a better valuation.

Having been through that process successfully raising $250,000, and now raising for our second round (www.stagedoorapp.com/invest), here are some of the challenges we faced being a Cypriot registered, London focused tech startup focusing on the Theatre industry:

Identifying the right type of investors for our first round
In the startup world it’s really easy for everyone to think that VC is the way to go. A lot of VCs have gone into early stage investing and after all everyone is raising money from VCs so no one even begins considering the scenario of not raising VC money. Not every business should be venture backed, and venture money is not always the best option for a company given the stage & industry it’s in. Identifying the right type of investors early on is important and can save you a lot of time. We did that by identifying 4-5 different investor profiles that we felt were a good fit for our business and quickly “tested” the appetite of each. Whichever investor profile was moving faster, we doubled down our efforts on them. We spoke with more than 100 investors in just a couple of months and noticed things in Cyprus were moving a lot faster for us, perhaps because we were from there and quite active in the startup community so there was an element of trust which wasn’t evident initially with UK investors.

Keep the legals as simple as possible and start with a good template contract
Once we found our lead investors we agreed to proceed with a convertible note instrument for our first round which ended up becoming a legal nightmare as new terms were agreed and the original template document we were trying to change wasn’t easily adaptable. This delayed the closing of our round by 4 months. Our lesson here was to keep it simple especially in the early rounds and make sure whatever template contract you are using is a good base and can be easily adapted to the agreed terms.

Being a non UK registered company:
While Stagedoor operates in London, and our product is focused on the London market, for various reasons we had initially decided to register it in Cyprus. Being a non UK registered company was always seen as a disadvantage from UK Investors. For our first funding round this wasn’t a problem as most of the investors who participated were from back home (Cyprus) but for our current round we’ve had to restructure the company and move everything to the UK, becoming EIS eligible as we have been more focused on finding London-based investors who were also associated with the theatre industry. Our current structure has made the offering a lot more attractive to UK investors.

Tapping into the Theatre industry
One of the biggest challenges especially for our second round has been finding strategic investors that are somehow linked to the theatre industry. Network.Network.Network.Network.
Especially being someone who hasn’t been involved professionally in the theatre industry before (and I’m sure most of you are running tech companies in industries you’ve never worked in before) you’ll really need to step outside your comfort zone, utilise everyone in your network to get introductions to other people that can then give you introductions to the right people. This takes a lot of time, relationship building and not being afraid to ask for things. 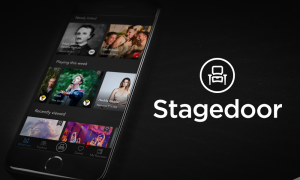 Stagedoor is the first theatre discovery app in the world. Launched in London with the aim of organising the Theatre industry’s information and helping theatre goers discover and book the best shows. All powered by smart algorithms and social recommendations.

They’ve raised €250,000 and received an EU innovation grant for €135,000
The company is now raising £350,000 to grow its user base to 100,000 in London, grow it’s revenue streams and prepare for launching in NYC. Pre-registrations for their investment campaign are now open at www.stagedoorapp.com/invest

StageDoor is part of the Empact Growth Studio, an ad-hoc support service for startups supporting their development, growth and sustainability www.empact-ventures.com

SUB Guest
This is a collection of blog posts from guest contributors in the StartUp Britain network. If you would like to contribute your own blog please get in touch with roland@centreforentrepreneurs.org
Back to all blog posts